Windows Workflow Foundation is a mature technology from the .Net Framework (full) which empowers developers to build enterprise grade workflow based products and solutions. It is easy to get started with, if offers a lot of features out of the box and it powers some of Microsoft’s key projects (Sharepoint, Azure Powershell Workflow Runbooks).

The porting of Workflow Foundation to .Net Core was one of the most discussed issues on the .net corefx github repository (160 comments), but Microsoft still decided against going forward with the project for the moment; it is possible that in the future, if more companies adopt Nano servers, the business case will get stronger and the decision will be revised.

However the WF Runtime and ETW tracking provider were ported unofficially at the CoreWF github repository by the PM leading the WF development at Microsoft, Dustin Metzgar, making the project a community effort. In its current state, it is far from replacing the full featured WF, but it is a solid starting point.

The Future of Workflow Foundation

The main focus of the WF development today is on the Workflow Manager. The next .Net version will also include some accessibility items for the WF Designer.

As far as support goes, Windows Workflow Foundation is not going anywhere, Microsoft has a lot of vested interest in it:

As Microsoft invests a lot of resources & innovation in the direction of .Net Core, it is important to emphasize that the classic full .Net Framework (and implicitly WF) is not going anywhere, it is continuously being developed and supported.

Besides Microsoft (SharePoint), there are many companies in the industry that have successfully integrated WF at the core of their products. A few examples:

Rehosting the Workflow Designer is quite simple and straightforward to do, as I have shown in a previous post. The demo project that I have open-sourced on github is a good place to start.

The WF designer offers a lot of features out of the box and on top of that it is easy to extend; that is why many companies have integrated it in their products and solutions.

There are 3 workflow types and you can use them according to your business case / process logic requirements; they can also be used together if needed, in a mixed mode (WF / Activities grouping is possible):

Workflows can be created visually, programmatically and via powershell scripting:

The serialization is done with Xaml and it makes Workflows very flexible:

At  the same time, the strong WF dependency on Xaml is one of the main impediments for porting Workflow Foundation to .Net Core.

WF offers out of the box a Built-In Activity Libraries (Control flow, state machine, flowchart, messaging, collection and error handling, powershell, etc) – see the Rehosted Workflow Designer example project for how to load and use them.

The number and type of use-cases which can be addressed with Workflows can be greatly extended with the help of Custom Activities: you can develop your own libraries and wrap existing APIs from 3rd party vendors for integration with WF workflows.

Overview of the WF technology:

There are 3 options for hosting & running workflows, each suitable for a different use-case: 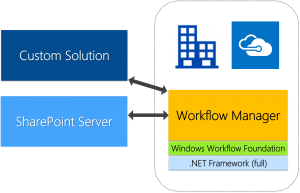 Workflow Manager is a very heavy component of Workflow Foundation and a core layer of Sharepoint.

It can be adopted in custom solutions, just like the Rehosted Workflow Designer, and it offers a lot of value out of the box: REST Endpoint & Client API, Multi-tenancy (Scopes) & Scaling, Management (DB Stores), Tracking and Monitoring, Instance Management, Fully Declarative Authoring.

However, the deployment is not lite (might not be a major issue for Saas, but it is when deploying with custom installers) and it enforces on the solution its implementation of versioning, instances, data stores.

Workflow Foundation offers a high level of transparency regarding both the process logic and its execution. Custom Tracking Participants are easy to implement and adapt to your specific use-case. The Track method is called whenever the workflow emits a TrackingRecord containing WF execution data (logs, insights).

The standard EtwTrackingParticipant model is a good starting point for implementing workflow tracking.

A key feature for long running workflows, Persistency is available out of the box in WF, as long as you decide to use the available Data Stores, WorkflowIdentity and persistency activities.

Besides enabling new scenarios, the feature also helps with resources scaling vertically when you have a workflow as a service model and you execute many workflows in parallel on the same server / vm: the WF state will be removed from memory until a next step / trigger restores it from the persistency data store and resumes its execution.

The Evolution of Workflow Foundation

WF was introduced in 2006 with .Net Framework version 3.0 and Visual Studio offered support for it. It was also integrated with BizTalk Server 2006 R2 via BAM Interceptors and Extensions (btsSend, btsReceive).

Afterwards, from as early as 2007, the development of WF was mostly aligned with the Microsoft Sharepoint roadmap:

Workflow Foundation 4 was a major milestone for the technology: it was a major redesign / fork which departed from the old WF3:

However, the WF4 effort was considered necessary and justified because of the very big performance improvements.

10 thoughts on “Windows Workflow Foundation in 2017”

This site uses Akismet to reduce spam. Learn how your comment data is processed.